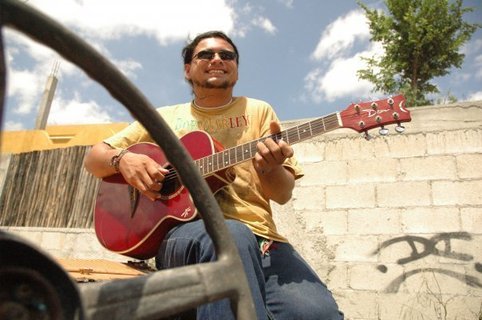 Miguel Reyes (guitar, vocals) was born in Poza Rica Veracruz, Mexico. Although Reyes got his first guitar at the age of 14 years old, he started learning a couple years later when he moved to Villahermosa Tabasco. Great part of his learning process was developed on the streets, playing with friends at parks, and other places near to school and his barrio. He studied Environmental engineering at the Universidad Juarez Autonoma de Tabasco in Tabasco, Mexico. He also traveled throughout Mexico for several years. At the age of 17, Miguel started his first band, “Kybalion” (‘98-’00), later he formed, “Ganyawey” (’01-’04), and “The Awesome Latin Taxi” (‘04-‘07).